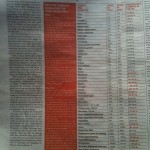 Tourists have been flocking to Iceland ever since October 2008 when Iceland’s economy crashed and it’s currency came tumbling down with it. From 2007 to 2009 the krona lost roughly half it’s value against the Dollar and Euro. So things should be really cheap, but that’s not the hole story – prices of goods and services have increased – with the small exception of white bread.